U-480 First Stealth Submarine: The Hunter Becomes the Hunted

“The Navy has both a tradition and a future–and we look with pride and confidence in both directions.” – Admiral George Anderson, CNO, 1 August 1961. 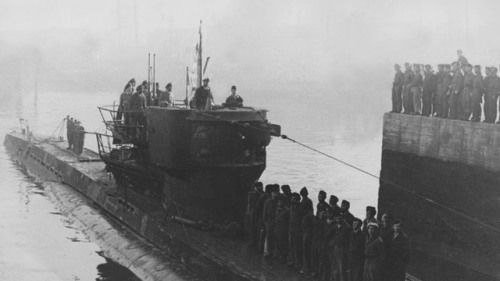 Another U-boat whcih was also coated with Alberich was "The Black Panther" - U-1105. The account of the attack on HMS Redmill and her evasion of her hunters following the attack is worth reading.

The inspiration of this post, comes from a novel published in 1984 (which I read just few years ago) – Tom Clancy’s The Hunt for Red October Red October – a fictitious modified Typhoon class submarine in the Tom Clancy novel who was built with a revolutionary stealth propulsion system called a “caterpillar drive”, which is described as a hydrojet system in the book. In the film (of same name) however, it is shown as being a magnetohydrodynamic drive. The drama of the story partially centers around the dual capabilities of this submarine. As a submarine of the Typhoon class, it carries many ballistic missiles armed with nuclear warheads. With a stealthy propulsion unit, it can no longer be detected by NATO naval vessels. As described in both the book and the film, these capabilities combine to create a horrific weapon, whereby the submarine could easily reach the coastal waters of a city, like Washington DC, fire its missiles, and destroy key targets before any government or military leaders could order a counterattack.

Before, I go into the science of MagnetoHydroDynamics (MHD) I would like to share a story, of what is known as U-480 – believed to be the First stealth submarines participated in World War II. This is how the story goes

In August 1944, during World War II, four Allied ships are mysteriously destroyed without warning off the coast of Southern England. Half a century later, off the Isle of Wight in the English Channel, the sea reveals a World War II German submarine with a design unlike any found before. Using cutting edge investigative techniques, a team of underwater detectives discover a story of invention and heroism, and a secret stealth technology. Submarine historian Innes McCartney identifies it as U-480, the first U-boat to go into successful action with a special coating that made it invisible to sonar, but which could not save the submarine from a fatal trap laid by the Allies. 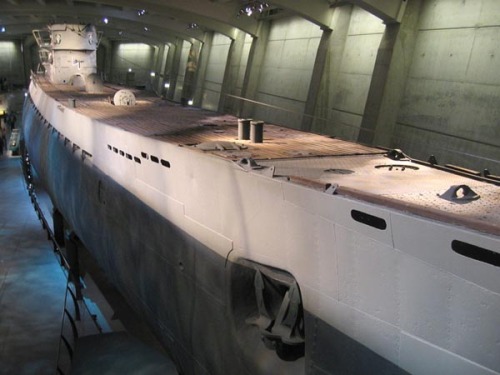 In August 1944, during the 2nd World War, four Allied ships are mysteriously destroyed without warning off the coast of Southern England. Sixty years later, in the English Channel, 20 kilometres south west of the Isle of Wight, 55 metres down, the sea reveals a 2nd World War German submarine unlike any found before. Using revolutionary investigative techniques, a team of underwater detectives discover a story of invention and heroism, and a secret stealth technology. Identified as U-480, it was the first U-boat to go into successful action with a special coating that made it invisible to sonar. But not even this could save the submarine from a fatal trap set by the Allies.

The most effective submarine detection device the wartime Allied Navy develops is ASDIC. It sends out pulses of sound and listens for echoes from the thick steel hull of U-boats. As the war progressed, this and other techniques meant that U-boats from being the hunters became the hunted and the Germans began to lose the submarine war. To regain the upper hand, in August 1944, the Germans dispatch a very special submarine U-480 to lie in wait under the main shipping lanes that cross the English Channel. 4 ships, totalling 14,000 tonnes and including the Canadian warship, HMCS Alberni and the British minesweeper HMS Loyalty were sunk without warning. But how in one of the most heavily-patrolled sectors of the English Channel was the submarine able to make its fatal attacks completely undetected?

Dives down to the submarine 60 years later reveal it is covered in a strange rubber coating. Is this responsible for the submarine remaining undetected? Remarkably a crewmember of the U-480 survived the war and talks about life in the submarine and what he thought was the secret of its success. U480 was sunk by the RN Frigates Duckworth and Rowley who were escorting convoy BTC 78 at position 11 miles South West off Lands end
24 th February 1945

But the Allies had a plan to deal with these troublesome submarines. Only now do previously Top Secret files reveal the devious traps they laid and how they enticed the Germans to fall into them. Close examination of the hull of the U-boat shows how she was sunk – with all hands. The secret history of U-480 is followed from the revolutionary invention of the special coating that rendered her invisible, all the way to her brutal demise 55 metres down – and the only survivor finally hears what happened to his ship and shipmates. The wreck of U 480 was first discovered in 1998. Die Dokumentation von John Ruthven und Peter Bardehle begleitet die erste Tauchexpedition mit dem Berliner U-Boot-Historiker Axel Niestlé und rekonstruiert das Schicksal von Jägern und Gejagten im Winter 1944/1945. The documentation of John and Peter Ruthven Bardehle accompanies the first diving expedition with the Berlin U-boat historian Axel Niestlé and reconstructs the fate of hunter and hunted in the winter of 1944/1945. Der Film ist eine aufwendige internationale Koproduktion für die Sender ARTE, ITV , National Geographic Channel , History Television und SVT . The film is a complex international co-production for ARTE channel, ITV, National Geographic Channel, History Television and SVT.

To reduce the sonar echo of U-boats, the Germans experimented with sound absorbing synthetic rubber which coated the outer hull of the boats. Radar absorbing materials were also used to coat the snorkel heads. Alberich (rubber coating used on U-480) consisted of synthetic rubber sheets of about 4mm in thickness which had sound absorbing properties. The material was Oppanol which was secured to the outer hull with adhesives, much like an outer skin. Although no conclusive tests were performed, but it was claimed that the echo reflection of a U-boat with Alberich was reduced by about 15 percent. In addition, it also acted as a sound dampener, containing the U-boat’s own engine noise. Although the principle was a sound one, problems were encountered with the adhesive coat which was not strong enough to adhere the rubber sheet to the hull. This resulted in the sheets being partially washed off, which flapped in the wake of the ocean current, causing hydrodynamic resistance and noise. Further research into more reliable adhesives were conducted, but up to the end of the war, only a few U-boats had received this treatment. A further contribution was that treating the hull was a time consuming and laborious task. The first U-boat to receive Alberich was U-11, a Type II coastal boat for trials on its sound absorbing properties. On April 1940, the first operational U-boat was treated, U-67 a Type IXC which was just being laid down. Thereafter, problems with the adhesive prevented further treatments until late 1944, when U-480, a Type VII was tested again using a new adhesive. The results were satisfactory enough and it was decided that all new Type XXIIIs and XXVIs would receive this coating, but ultimately only one Type XXIII, U-4709 had been completed with the coating.

Submerged U-boats employed several devices to evade allied pursuers equipped with sonar. These consisted of decoys which resembled a submerged submarine and noise-makers to blackout the pursuer’s listening device. Bold Canisters – was a metal canister about 3.9 inches in diameter, filled with calcium hydride which gave off large quantities of gas when mixed with sea water. It was launched from a special tube and on release, sea water seeped into a special valve which reacted with the chemical. The valve would open and shut, causing the canister to stay at a certain depth until the compound was depleted in about 20 to 25 minutes. To underwater locating devices such as sonar, the resulting bubble cloud could resemble a submerged U-boat, and unless the sonar operator was especially skilled, it was often difficult to distinguish from a real target. The allies called this a “Submarine Bubble Target” (SBT). BOLD was widely used from 1942 onwards, with new and improved versions being developed until the end of the war. The last was BOLD 5, and was intended for use at depths of up to 200 meters. Siegmund was an anti-sonar device which emitted a series of deafening explosions and were intended to blackout the enemy’s listening gear. The U-boat would make its getaway by altering course or running at high speed during this short period.

I will return the Red October, with the application of MagnetoHydroDynamic Drives in next post, so please do check back.